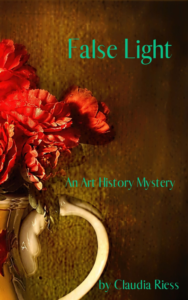 Eric Hebborn (born 1934-assassinated 1996) was a masterful forger with a mischievous streak. Riess’s second in her art mystery series takes off from a brain teaser devised by her fictionalized Hebborn and is in keeping with his real-life persona.

After publication of his book, Drawn to Trouble (Edinburgh, 1991), Hebborn encrypts two copies with clues leading to the whereabouts of many of his counterfeit old masters. On each of the title pages he pens a tantalizing explanatory note. One copy he sends to an art expert who has both exposed and admired him. The second copy he releases into general circulation. The catch: both books are needed to decipher the code.

FALSE LIGHT begins almost thirty years later, when the two copies are united and a Pandora’s box of murder and deceit is unleashed.

Erika Shawn, an editor at Art News and Harrison Wheatley, professor of art history at NYU Fine Arts, are again featured. As in STOLEN LIGHT, the pair–now a married couple–find themselves caught up in an intricate web of criminal activity after accepting what initially appears to be a straightforward academic challenge: to break the Hebborn encryption.

After a woman associated with the research is murdered, Harrison insists they withdraw from the project. Erika, however, is resolved to see it through. Harrison, if only to support her, must stay in the game.

To navigate the clandestine world of art crime, the couple seek the help of pros introduced in STOLEN LIGHT; among them: Lieutenant John Mitchell, now a private detective and Greg Smith, exec board member Art Loss Register, the worlds largest art theft database. 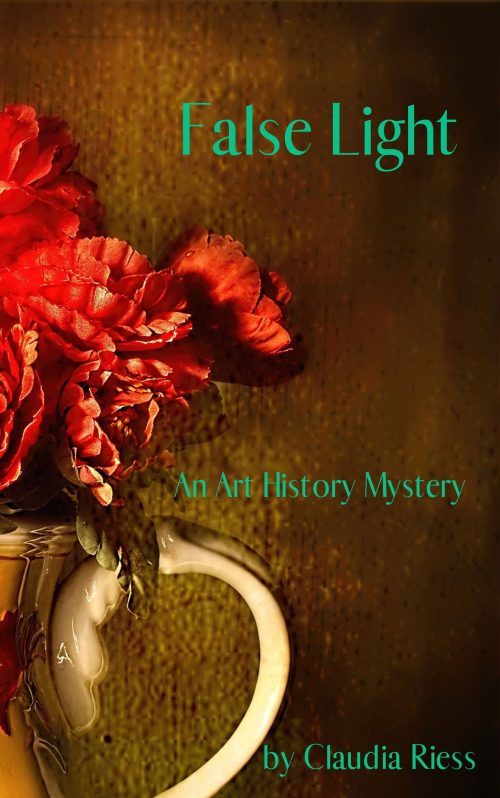 “Riess has outdone herself. From the very first pages False Light explodes into motion. There is excitement, intrigue, and intricate painting of characters. It is fast-moving and mind-grabbing. The author’s best yet.” ~Alan Covey, M.D.

“What an enchanting read! The narrative pulls you along at a great pace. Not only is the love relationship of the two leading characters, Erika and Harrison, delightfully told, but the complexities and criminal activities of the art world are revealed dramatically. Mystery. Passion. Crime. All in one. What more could a book-lover want.” ~Elizabeth Cooke, award-winning authorof the Hotel Marcel Series

Order or Pick Up a Copy of “False Light” at:

Manhattan – A prolific author who resides in Manhattan and has a Vassar education, Claudia Riess has written her fifth novel, “False Light.” After the book is released in October, the author is expected to speak at several bookstores, libraries and non-profit organizations in the New York City area. [More…]