An Artful Writer – An Interview with Claudia Riess 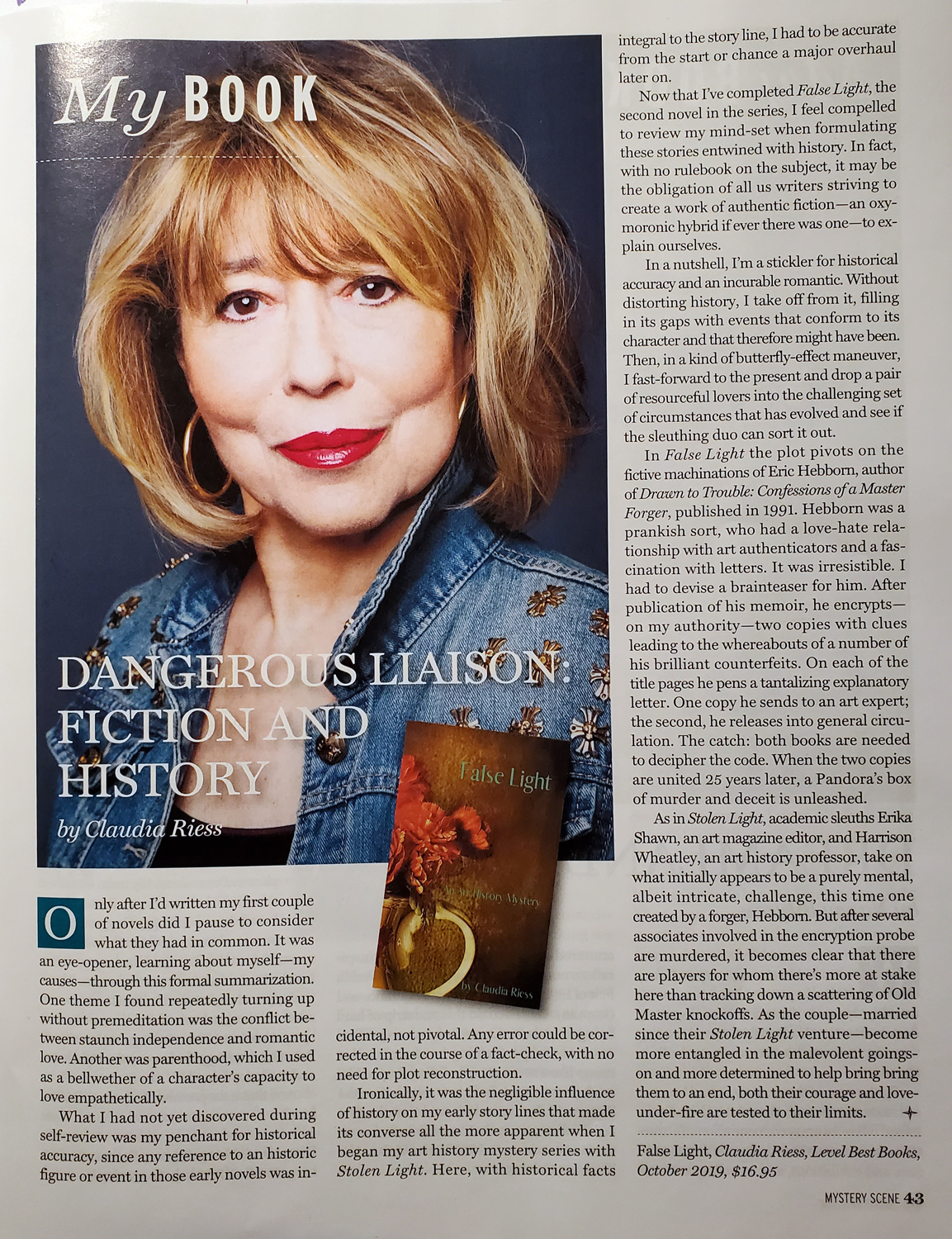 Manhattan – A prolific author who resides in Manhattan and the Hamptons, Vassar graduate Claudia Riess has written her fifth novel, “False Light.” After the book is released in October, the author is expected to speak at several bookstores, libraries and non-profit organizations in the New York City area.

Last year, Riess signed a three-book contract with Level Best Books, which re-released her book, “Stolen Light,” in March. The second book in the art mystery series will be the previously mentioned “False Light,” and the third will be “Knight Light,” which has an expected release date in 2020.

“Stolen Light” was the first of the three suspense novels set in the art world. The plot involves murder, the Italian Renaissance, and the Cuban Revolution—as well as a love story.

“In this art-world thriller, Riess draws the characters with a broad brush, but they have all the capability, chemistry, and give-and-take of a strong mystery-solving duo… complex and intriguing,” according to Kirkus Reviews.

The newest book, “False Light,” continues the evolution of the professional—and personal—relationship between the art magazine editor, Erika Shawn, and the professor of art history, Harrison Wheatley.

In “False Light,” Shawn and Wheatley attempt to crack the long-un-deciphered code of prankish art forger, Eric Hebborn (1934-1996), which promises to reveal the whereabouts of a number of his brilliant counterfeits. But what starts out as an academic puzzler leads to far darker mysteries in the clandestine world of art crime, culminating in murder. As the couple navigates this sinister world, both their courage under fire and the stability of their relationship are tested.

“From the very first pages ‘False Light’ explodes into motion. There is excitement, intrigue, and intricate painting of characters. It is fast-moving and mind-grabbing. The author’s best yet,” says Alan Covey, M.D.

Claudia Riess has worked in the editorial departments of The New Yorker magazine and Holt Rinehart and Winston books. She has also edited Art History monographs. For more about Riess and her work, visit www.claudiariessbooks.com.

All three books in the art mystery series will be available through Amazon.com, BarnesandNoble.com, IndieBound.org and at independent book stores. For bulk discount purchases, contact www.levelbestbooks.com.

For information about booking Riess as a speaker, contact her publicist, Janice Jay Young, at 631-284-3737 or jartandi@yahoo.com. 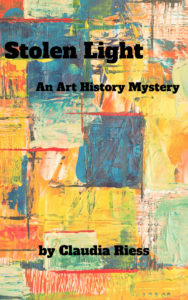 Claudia Riess has recently signed a three-book contract with Level Best Books, which will be re-releasing her book, “Stolen Light,” to be published on March 26, 2019. The second book in the art mystery series will be “False Light,” with an expected release date in October, 2019 and the third, “Knight Light,” with a release date in 2020.

STOLEN LIGHT is a suspense novel set in the art world and involving murder, the Italian Renaissance, and the Cuban Revolution, as well as a love story.

In 1958 in Cuba, the main house of sugar plantation owner, American-born WILLIAM DELANEY is vandalized by a band of Castro’s rebels, who seize Delaney’s art collection to raise money for weapons. Delaney is killed during the incident, and his pregnant wife, fearing for her safety and that of her unborn child, flees Cuba, never to look back.

Now, over fifty years later, Delaney’s wife dies, and his daughter, HELEN GILMORE, motivated by the desire to “know” the father whose life was kept shrouded in secrecy by his wife, is determined to restore what she can of his legacy. Her desire is fueled by documents she discovers in his long-unopened safe deposit box, but at the same time their very nature prompts an under-the-radar investigation. To this end, she seeks the help of a young Art News writer ERIKA SHAWN, whom she admires for her intelligence and spunk. Erika’s boss, deciding her protégée could do with a more seasoned hand, hooks her up with art historian, HARRISON WHEATLEY.

What begins as an academic endeavor quickly changes character when Helen is brutally murdered and Erika receives an anonymous note warning her to give up her assignment or suffer a similar fate. Undeterred, she continues her investigation, Harrison following suit.

The pair’s determined probing leads them to finding what may be a Michelangelo drawing; to unraveling a mystery over a half-century old; and to solving Helen’s murder. Their quest takes them to London and Florence, where their sleuthing is complicated by their burgeoning passion, as irresistible and, in a sense, as threatening as their mission.

Writing in the Face of Grief

In 2009 my husband was windsurfing off the coast of Maui; flexing his well-toned muscles as he perfected his jibes; falling off the board and climbing back on, conquering the force of nature to be one with it. Meanwhile, I, his landlubbing wife, safely planted in the sand, was snapping photos of my seventy-two-year-old daredevil. Read more…