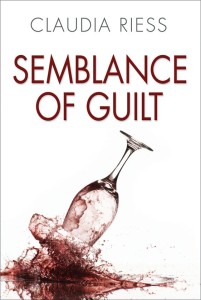 SEMBLANCE OF GUILT is the story of ELLEN DAVIS, a recently divorced local reporter who is set up as the murderer of a new friend, and with the help of a detective on the case, PETE SAKURA, finds herself in a race against time to uncover the evidence that will save her.

Ellen’s husband has recently left her for another woman, and she is trying to reassert her independence. She starts writing for the local newspaper, where one of her assignments is to cover weekly items in the police blotter. When she travels to the station to pick up the information, she meets her contact, Pete, a handsome, witty Japanese-American, and she is immediately drawn to him. Another of Ellen’s assignments is to cover recent additions to the community in her “Around The Town” column. It is through this task that she meets GRAHAM and SOPHIA CLARKE. He is an administrator at Columbia; she, his beautiful Greek wife. Ellen and Sophia become fast friends.

While visiting Columbia one afternoon, Ellen inadvertently catches Graham in the company of another woman, and briefly investigates on Sophia’s behalf. This innocent act proves to be the start of Ellen’s undoing.

For reasons unbeknownst to Ellen, Sophia begins to suspect that she and Graham are having an affair. Then, Sophia is found murdered and to all appearances, Ellen is the last person to have seen her alive. When her fingerprints are found on the murder weapon, she is arrested. Prior to her indictment and as her trial progresses, the evidence mounts against her. As it begins to point overwhelmingly to Ellen as the guilty party, she must take matters into her own hands and prove her innocence. As her efforts to save herself intensify, so do the romantic feelings she shares with Pete. It is a complex relationship with mysteries of its own, and can either save them both or lead to utter disaster.

“A determined amateur detective who’ll garner fans with her refusal to back down or give up.” — Kirkus Reviews

“…tightly wrapped crime thriller. The characters are so believable. There is plenty of suspense and the ending is just right. I would really like to see Ellen and Pete become a series.”
— Linda Strong

“…the environment…jumped right off the page for me. Riess plays well to the grittiness of the crime genre while amping up the tension of how it’s all going down.”
— Hilary

“…Riess, the lauded author of Stolen Light and Reclining Nude…once again has wrapped suspense and intrigue into a romantic mystery…Everything happens fast and you keep reading to figure out how and why. Yes, the book hooks you and pulls you in.”
— Faith D. Flaherty

“The plot and characters are complex and compelling.”
— B. Niederer, M.D.

“I had to go back to reread it again just to satisfy my inner voice screaming for more.”
— Marie from Lunar Haven Reviews & Designs

“Riess is a writer with a treasure trove of little important gestures that don’t get overlooked or ignored…How people observe one another resides at the heart of Riess’s storytelling.”
— Dorcas

“Ellen Davis is a female character who challenges what it means to be a woman in today’s world.”
— A. A. Pearce

“Let’s say this: Riess knows how to pen one heck of an elaborate plot–one that certainly left my mind spinning.”
— J.Q.L.

“A fast read with an intricately woven plot. I couldn’t put it down.”
— Inishowen Cailin (Just BookTalk)

“This story has the freshest plot and characters. That made the book much better than comparable books.”
— Connie Anderson

“Descriptive details placed me right in the story. Great plot that became a page turner for me. The sex scene had great passion and sensitivity for this age of raw reality.”
— Joseph Kurtz, OD

“An exciting and fast read. Flowing prose and an unpredictable plot. I couldn’t put it down. Yes, it’s a five star book.”
— Alan Covey, M.D.