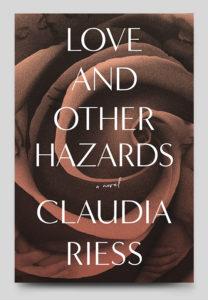 LOVE AND OTHER HAZARDS

LOVE AND OTHER HAZARDS is a novel about single parents stumbling toward fulfillment in an odyssey of sex, love, and parenting. A chance encounter at the MET brings Glenda Fieldston and Eugene Lerman together. Both plagued by personal demons of their past, the two begin a friendship fraught with complications. Follow their tumultuous journey on the path to uncharted love.

GLENDA FIELDSTON is at the Metropolitan Museum of Art with her seven-year-old daughter, ASTRID, who is inspecting the anatomically correct parts of a male statue. Glenda considers this an appropriate learning experience since Astrid, whose father is an anonymous sperm donor, has never seen a nude male. EUGENE LERMAN is walking by at a distance with his eight-year-old daughter, MEREDITH, a schoolmate of Astrid’s. Meredith spots Astrid and is grossed out. Eugene has a prudish twinge. Glenda and Eugene, who have never met, engage in long-range cursory assessments, and the families go their separate ways.

But not for long. Glenda, a consultant at a computer firm, is scheduled to upgrade the computer system of a medical publishing company, where Eugene, she discovers, is an editor. In the course of analyzing the system, Glenda uncovers signs of fraudulent activity and is charged with the task of finding its source. The process takes an extended period of time and brings Glenda and Eugene into close association.

So begins a friendship fraught with complications. Glenda’s independence is self-imposed and fierce. Eugene’s was foisted on him by a wife who left him. Although Glenda’s and Eugene’s personal demons are incompatible, their longings are, confoundedly, in harmony. Their cautious friendship is further inhibited by past and present relationships, and it remains to be seen if they can break out of their set ways—and mind-sets—to make a break for uncharted love.

LOVE AND OTHER HAZARDS

“The characters were well developed and the novel really made me reflect on life. I cared about the characters in a way that I have not in a really long time.” ~Maryann Pereira

Claudia Riess bounces back and forth between Remsenburg and New York City to find inspiration for her novels. Although the author and ex-New York Times editor has mostly focused on children’s books, she has pushed her boundaries over the last few decades, beginning with “Reclining Nude” in 1982 followed by 2015’s “Stolen Light” and 2016’s “Semblance of Guilt,” and this past June, the complex, romantic novel “Love and Other Hazards.” [More…]